Install, Test and Use JDK 6 update 3 on Windows XP Pro

2.     The following JDK installation wizard will be displayed. Click Next. 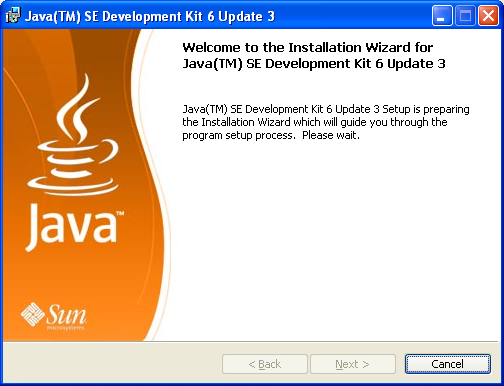 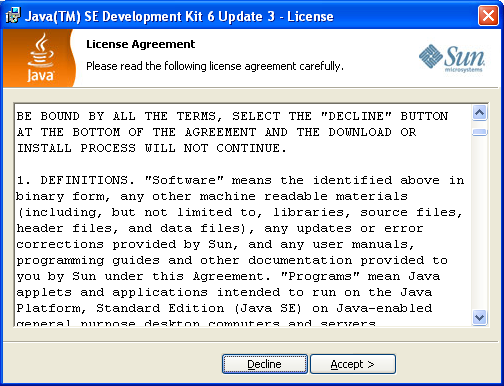 4.     By default all the components are selected. Click Next. 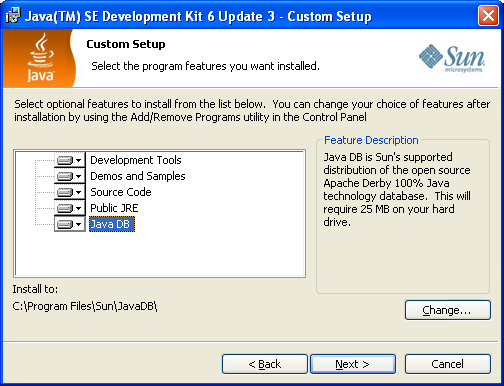 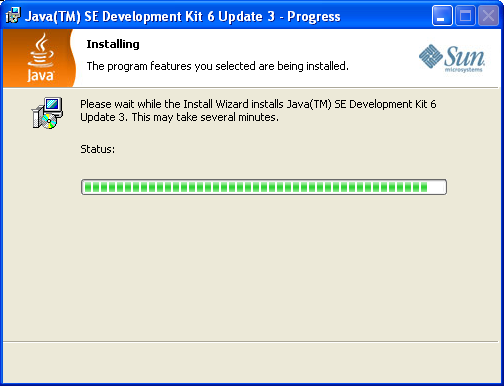 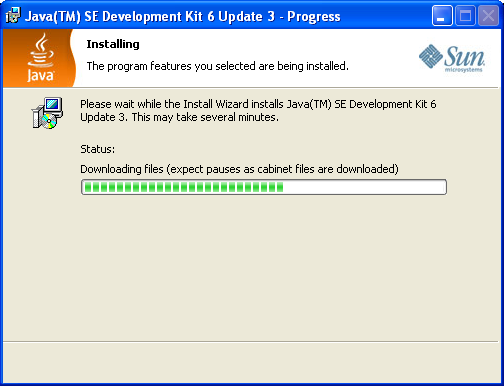 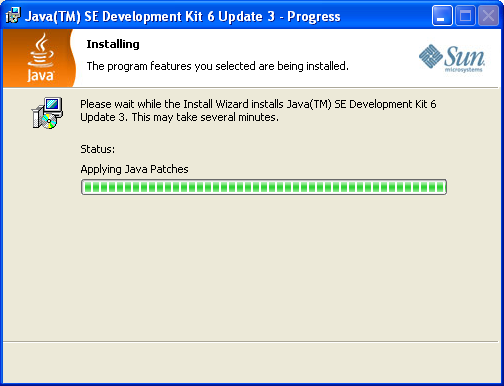 6.     For the second stage, select components that you want to install. In this case we select all components. Click Next when you finish. 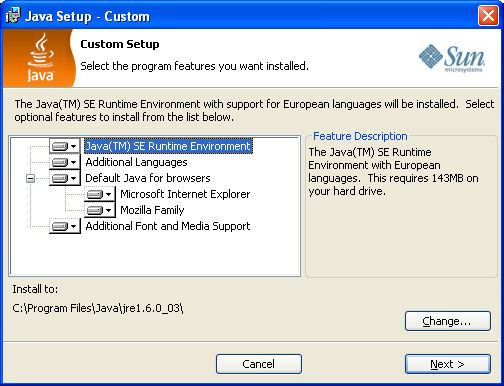 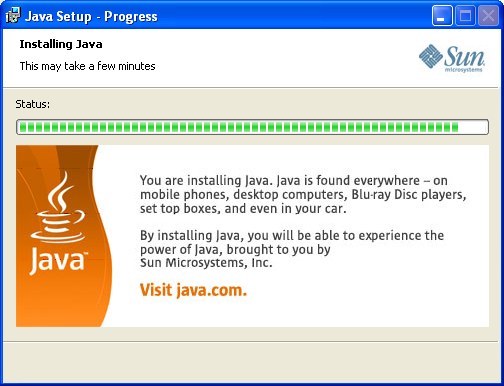 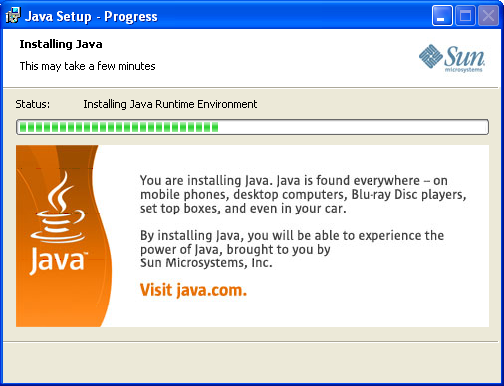 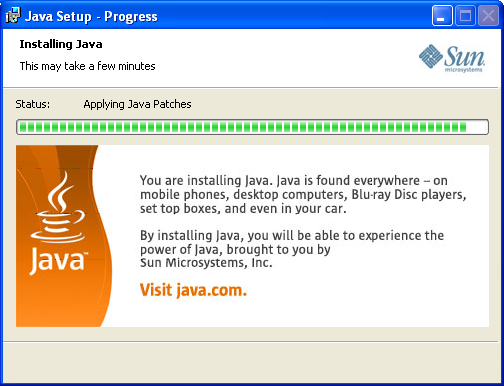 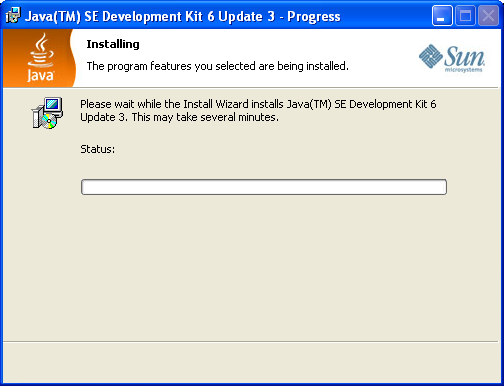 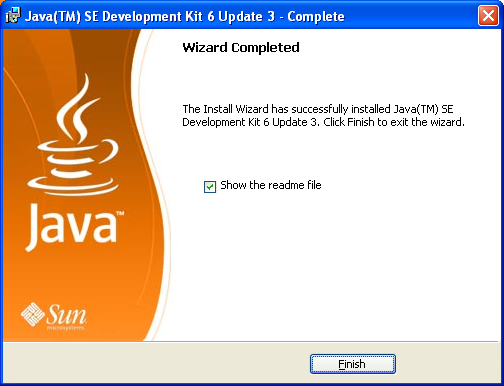 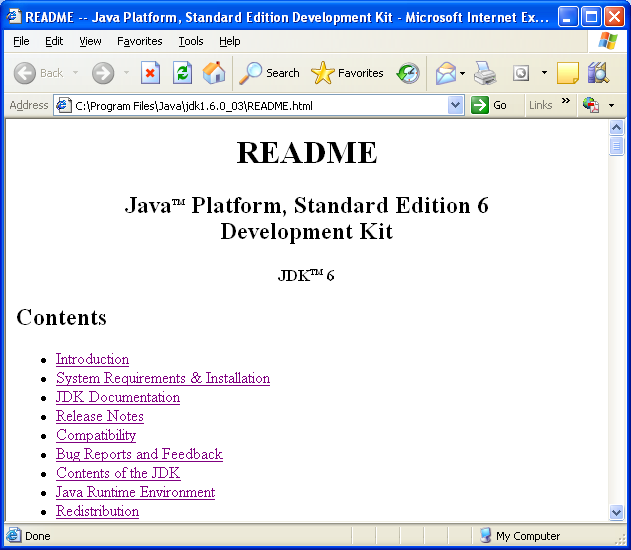 11.Depending on your JDK installation path, add accordingly if there are none. In this case the Java JDK was installed in Program Files folder else change accordingly. This to make sure we can run Java binaries from any Windows relative path otherwise we need to use the absolute path to the Java binaries.

1.     Open Windows command prompt console and type path. This will display the Java binary path for confirmation on the task done before. Next, execute the following commands just to be familiar with some of the java command line tools and utilities.

2.     Thejava tool launches a Java application. It does this by starting a Java runtime environment, loading a specified class, and invoking that class's main method. 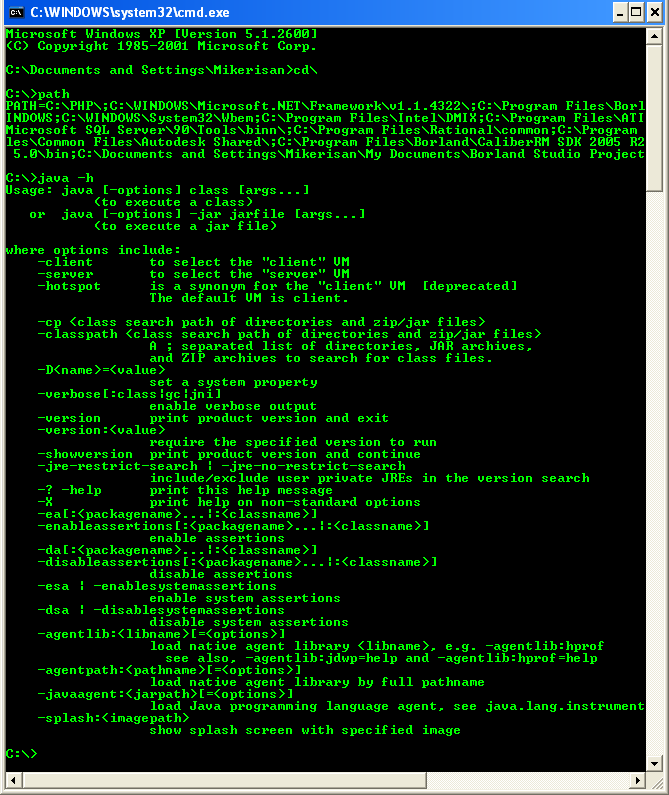 3.     Next, checking the JDK version by issuing the following command.

4.     Thejavac tool reads class and interface definitions, written in the Java programming language, and compiles them into bytecode class files. 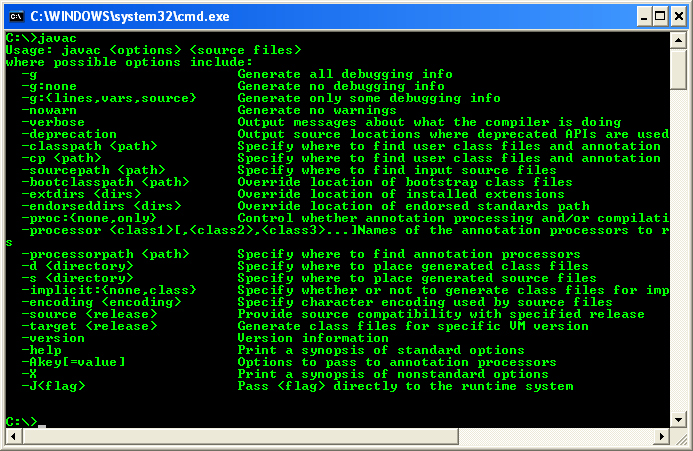 5.     Thejavah produces C header files and C source files from a Java class. These files provide the connective glue that allows your Java and C code to interact.

6.     Theappletviewer command allows you to run applets outside of the context of a World-Wide Web browser.

7.     TheJava Debugger, jdb, is a simple command-line debugger for Java classes.  jdb helps you find and fix bugs in Java language programs. There more java tools that you may wan to try on your own. 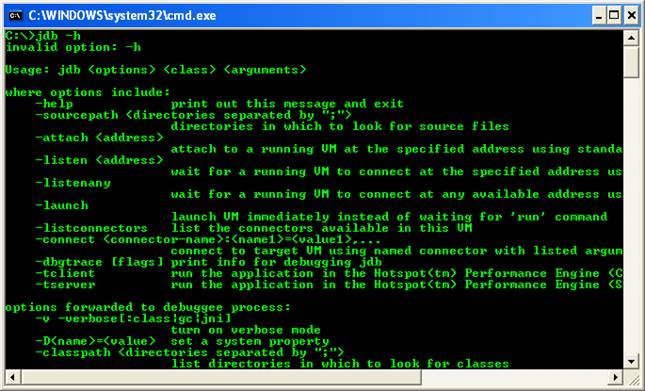 8.     Let try a very simple java program, compile it to bytecode using javac tool and run (parse or interpret) it in an orthodox, primitive way using java command line tool just to test our JDK. Use Wordpad or Notepad or other unformatted text editors, write the following Java code and save it with .java extension. Keep in mind that the class name and the java program file name must be similar. In this case it is Helloworld. Java is a case sensitive language. 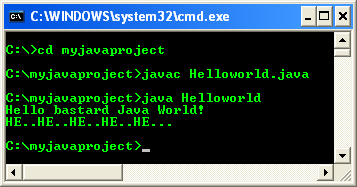 12.Doing a java programming like this not a productive one. Later we will install, test and use other java IDE such as jGRASP and NetBeans. More JDK tools can be found atsun.com.

It is beneficial in order to see the different between Java compiler and interpreter clearly we need to know the basic how Java applications are developed.

However the machine must have Java interpreter such as java, Java Virtual Machine (JVM), Java Runtime (JRE) or bytecode compiler for each processor type on which the bytecode is to be executed. Java bytecode also could be compiled into machine code directly during the development phase. One of the compile and interpret disadvantage is this process is slower compared to the directly compiled method.

The Java compiler and interpreter can be summarized in the following Figure.

Java compiler and interpreter in Java build and run process

A class library is a set of classes (that contain objects and methods) that support the development of program. Class library is one of the code re-usability features of programming language and represent the fundamental object oriented principles data abstraction: encapsulation, inheritance and polymorphism. Routines or frequently used tasks have been group or bundled together with the compiler or development environment. What is needed is to learn how to use them and not how to create or re-create them from scratch that make programming tasks more productive.

Standard class library is a class library that has been tested, standardized and endorsed by standard committee and bundled together with any Java compiler or Integrated Development Environment (IDE). The non-standard Java class library also available however it is for specific Java application developments that supplied by third party vendors or companies such as for graphic manipulations, games, engineering and scientific applications.

Standard class library is made up of several clusters of related classes which are sometimes calledJava APIs or Application Programming Interface for example Java Database API for Java database programming and Java Swing API which refer to a set of classes that defines special graphical component used in graphical user interface (GUI) development.

The classes of the Java standard class library are also grouped into Java packages. In this case each class is part of a particular package. For example the String class is part of the java.lang package and so does the System class. The groups of classes that make up a given API might cross packages. Example of Java packages that are part of the Java standard class library are java.applet, java.awt, java.net and java.sql. The using of the dots (.) means a namespace. The following definition given by sun.com documentation:

A Java package is a mechanism for organizing Java classes into namespaces. Java packages normally stored in compressed files called JAR files. We normally refer to Java packages when mentioning certain classes that contain the routines that we want to use. In real Java programming, the classes of the java.lang package are automatically available for use. However to use any other packages we must either fully qualify the reference or use an import declaration. The import declaration at the beginning of the program so that all the classes are available for the whole program.

For example, every time we want to refer to the Scanner class that is defined in java.util package, we could write java.util.Scanner in the source codes something like this:

Another method that is more productive way is by using the import declaration. The import declaration specifies the packages of classes that will be used in a program so that the fully qualified name is not necessary with each reference. For example:

Then in the program we just use:

By using asterisk (*), any class inside the package might be used in the program. For example:

which will allows all classes in the java.util package to be referenced in the program without qualifying each reference. A collection of packages that Java developers can use to create full- featured Java applications is available in Java Foundation Classes (JFC).

As explained before, source code file is a file that contains Java source codes. The file extension is .java. For example if we create a very simple Java program using Java IDE such as JGRASP or NetBeans, during the Java application’s project creation, the program request us to put the project name, for example helloworld. This file will be helloworld.java and then we can start to do the coding.

When we finish the coding work, we can start compiling usingJava compiler. If our compiling process is successful the Java source code will be translated into Java bytecode. This bytecode is stored in the .class file extension. From our previous example if the source file is helloworld.java, the bytecode file that generated after the source code file been compiled is helloworld.class. The process can be simplified in the following Figure:

We can use any text editor to write Java source code and normally it should be unformatted text editors such as WordPad, Notepad or vi. However for serious developer they will use Integrated Development Environment (IDE) such as Netbeans or Java Studio that come with other advanced features and tools.

Primitive data type includes fundamental values such as number and characters. It is traditional and non-object oriented language data type. Object usually represents more complex variables that mimics or try to represent the real objects in the real world. In Java there are eight primitive data types as listed in the following Table.

In Java, other than primitive data type, variables are represented using object. Object reference type variables have a state and a set of behaviors. State represents characteristics that currently define the object while behaviors of an object are the activities associated with the object.

In Java program, object’s state represent attributes that are values stored internally which may be a private data or as other object. The behavior which may be represented by methods, that is a group of programming statements that is given a name.

As a whole, object is defined by a class. A class is a model or blueprint from which an object is created. When we declare an object reference type variable, we will said that we instantiate an object. In a program we create new object such as Scanner using a new operator. Then we were able to invoke its methods such as println().

In the Java code, the println() is a method that provides a service. This service provided by the System.out object, which represents the standard output stream. The declarations of object and primitive variables have a similar structure. For example:

Both previous declaration examples don’t have initial values or they are said uninitialized variables and graphically, in memory can be depicted by the following Figure.

Hence, the act of creating an object using the new operator is called object instantiation. Then, an object is said to be an instance of a particular class. The new operator returns the address of the new object. By extending the previous example:

After these statements are executed, those variables can be depicted as:

Where xxxxxx is a memory address. In primitive data type the variable holds the data directly while for reference object the variable just hold a reference address of the real data and it can be said as a pointer to the location in memory where the object is held. Primitive data type variables are available and used in non-object oriented programming such as C language whereas the object reference data type variable only available and used in object oriented language such as Java and C++.

Write a Java program to:

// Calculates and prints my yearly income and related items

The following Figures show the steps using Java command line. Firstly we compile the source code that will generate a bytecode. Make sure there is no error. 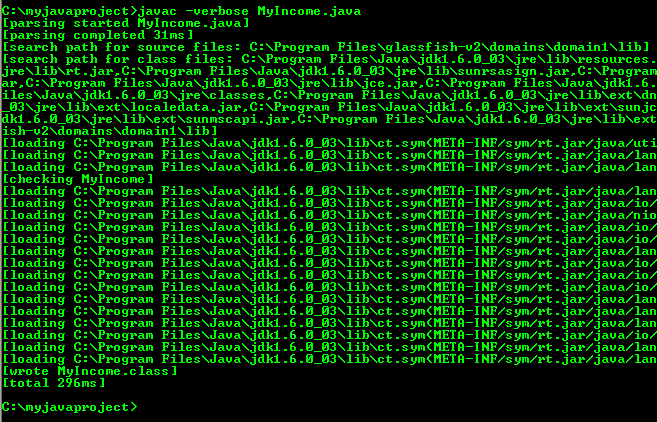 After the MyIncome.class bytecode has been generated, we can run the bytecode by specifying the classpath to the file.

Theclasspath can also be set in the Windows Environment Variable however it is not recommended. More Java program examples can be found in thejGRASP tutorial.